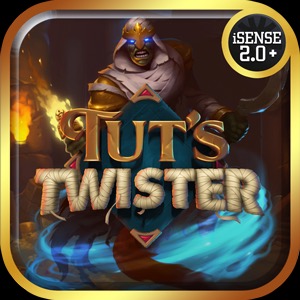 The peace of King Tut has been disturbed and now he's risen from his tomb, wreaking havoc across the reels in Tut's Twister! Hit two wilds and Tut will transform one into a wild sandstorm, creating a reel-tall column of wilds! This wild vortex will continue to consume wilds on the reels, awarding respins and a multiplier as it grows out of control. After finally disintegrating, King Tut will unleash all absorbed wilds back on the reels for epic win potential! Use single wilds to collect ancient hieroglyphics, unlocking Tut’s hidden curses and unleashing twisters of overwhelming power! Let this ancient ruler's anger pave your way to legendary riches and join the army of King Tut's win-hungry zealots!
Play Free

The peace of King Tut has been disturbed and now he’s risen from his tomb, wreaking havoc across the reels in Tut’s Twister! Hit two wilds and Tut will transform one into a wild sandstorm, creating a reel-tall column of wilds! This wild vortex will continue to consume wilds on the reels, awarding respins and a multiplier as it grows out of control. After finally disintegrating, King Tut will unleash all absorbed wilds back on the reels for epic win potential! Use single wilds to collect ancient hieroglyphics, unlocking Tut’s hidden curses and unleashing twisters of overwhelming power! Let this ancient ruler’s anger pave your way to legendary riches and join the army of King Tut’s win-hungry zealots!

Landing 2 or more wilds on a base game spin activates Tut’s Twister. Tut will transform the leftmost wild from the activating spin into a wild reel (twister) for the remainder of the feature. The player is then awarded respins while the wild twister column pulls each wild closer to the twister with each walking wild respin. New wilds that land on the screen during each respin also become walking wilds in the direction of the tornado.

If the player manages to obtain a count of at least 3 wilds that have become walking wilds during the twister feature, a multiplier is awarded on all spins for the rest of the feature. The multiplier starts at 2x for a count of 3 wilds, and increases by 1 for each additional 3 wilds landing on the screen during respins.

The twister feature continues to award respins as long as one wild is still walking. When no wilds are left to walk toward the tornado, a “last chance” respin is awarded to give the player one more try to land at least one more wild to keep the twister mode active. If no wilds land on the last chance feature, all wilds absorbed into the twister are spread out randomly on any reel window position except the wild column, and a final win is evaluated at the same multiplier achieved as the previous spin.

When the last unfilled hieroglyph symbol is filled in for a given reel, the feature activates and Tut transforms the single wild into a twister as the reels respin. During the first respin in the twister collection feature, each hieroglyph symbol from the triggering reel is randomly shot on positions on the reel randomly excluding the positions from the wild twister column. The wilds shot onto the screen are counted toward the count for the multiplier, guaranteeing a start at at least a 2x multplier as each reel adds at least 3 wilds. After the collected hieroglyphs are added to the reel window, any additional wilds that land are also turned to walking wilds and contribute to the multiplier count as well. The reels then respin as the wilds walk in the exact same manner as the regular Twister feature.

When exactly 1 wild lands, Tut randomly reveals a Mystery Win chance. This win may result in an unmatched hieroglyph (no prize), a matched hieroglyphic (extra collection), a coin prize, or an extra wild.

Mystery Win may result in an extra wild. If an extra wild is awarded, it will be shot randomly on reel except the one it has been shot from. The leftmost wild will then be transformed into a twister, triggering the Twister feature as if 2 wilds had landed from the original spin.

2 free hieroglyphs are automatically awarded for the player on the third reel when the player opens the game for the first time.

Tut’s Twister is a Video Slot with 5 reels, 4 rows and 25 paylines oriented from left to right. The game has four high pay symbols and four low pay symbols that win if three or more are lined up in sequence on a payline. There is also a wild symbol that substitutes all regular symbols.

Landing 2+ Wild symbols triggers the Tut’s Twister feature. The twister Feature turns the left most reel with a wild into a wild reel and awards respins as long as there is at least 1 wild on the reels.

While the Twister Feature is active, all wilds turn into walking wilds. Walking wilds move by 1 reel position each respin towards the wild reel.

Landing exactly 1 wild in the base game may award a potential mystery win. The potential prizes are:

Each reel has its own Hieroglyph collection. When exactly 1 wild lands on the reels in the base game, it turns into a Mystery Win and may award a hieroglyph towards that reel’s collection. Filling any hieroglyph collection activates the Twister feature on the given reel. In addition to awarding a wild reel, all the wilds that were collected are placed randomly across the other reels.

To calculate the total payline coin win, calculate all payline wins and add them together.To calculate a single payline win, count the number of identical symbols lined up in sequence on the line from the left. If three or more identical symbols are lined up, find the coin win value in the Pay Table. There, players can find the value for all symbols for 3 in a row, 4 in a row, and 5 in a row. Only the highest winning combination per line is paid out. The above does not include any scatter or collectable symbolsIf the winning combination starts with three wilds, there can be many ways to interpret the win. In this scenario, only the highest win combination is paid out. Calculate the total win in a home currency by multiplying the total coin win with the coin value.

HOW TO CALCULATE WINS WITH A FRACTION OF A CENT

C) Bet – The bet size is 1 coin per payline. You can choose to view this field in cash or coin view by clicking on it.

D) Max Bet – Sets the coin value to the largest available. Press the Max Bet-button again to revert back.

F) Autoplay – Players can make the game play without pressing the spin button every time. Choose the number of rounds to auto play by pressing the Autoplay button. Players can choose additional conditions for when to stop autoplay. The loss limit in some game client versions prevents players from losing above a set limit during an autoplay session. To stop autoplay manually, press the Autoplay button.

G) Win – Displays the win for the current or last win payout step. You can choose to view this field in cash or coin view by clicking on it.

H) Balance – Displays the account balance. You can choose to view this field in cash or coin view by clicking on it.

I) Cash/Coin view – You can choose to view Bet size and Balance in either Cash or Coins. If you choose cash, the game will transform all values in coins to cash by multiplying the coin amount with your coin value. You can switch between Cash and Coin view by the option in settings or by pressing the Bet field or Balance field.

The overall theoretical return to player is 97.1%.