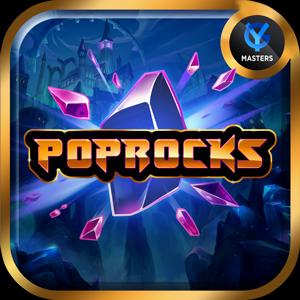 Introducing PopRocks™ – the first in a series of PopWins™ games! In this ways game, mystical gems unleash their arcane powers to pop, multiply, and expand to a max win potential of 72,188x bet!
Play Free

Winning symbols pop and are replaced with two new symbols until no more wins happen.
Reels are expanded in the process up to a maximum of 7-symbols high.

Every 7 pops collected in the pops container increases the multiplier by 1.

When the game is expanded to 7 columns high, bonus mode is triggered:
– One (1) WILD is immediately awarded and replaces a symbol at random.
– Multiplier increases by 2 instead of 1 for every 7 Pops.
– Only 1 new symbol will appear from every Pop.

Introducing PopRocks™ – the first in a series of PopWins™ games! In this ways game, mystical gems unleash their arcane powers to pop, multiply, and expand to a max win potential of 72,188x bet!

PopRocks™ is a win-all-ways game with up to 33,614 ways to win. It features the exciting new PopWins™ mechanics.
The exciting new PopWins™ feature pops each winning symbol and replaces it with two new symbols until no more wins happen, expanding the reels in the process. The game starts at 5×3 and expands to a maximum 5×7. Pops are collected in a container and for every 7 collected pops multiplier increases by 1.
Once all reels reach 7-symbols high, a random WILD is added to the board and the multiplier increases by 2 for every 7 pops collected.

Press the spin button to play the game.
Press the autoplay button and select your autoplay options to make the game play by itself until you choose to stop it.
Select your bet size on the Bet Level-interface
Press the hamburger icon to open the game settings where you can activate “Stop autoplay on feature hit”.
The game panel will display your current bet size, current win and current balance.

HOW TO CALCULATE WINS WITH “WIN ALL WAYS”

The reels are spun with a fair and equal chance for each stop position by a certified random number generator. For more information, visit http://www.yggdrasilgaming.com/en/about-us