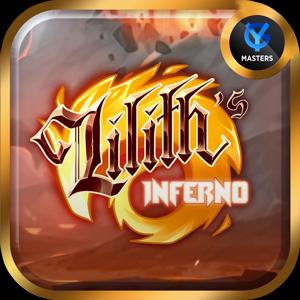 In Lilith’s Inferno players follow our demon on her journey to the gates of the blazing underworld. She must slay all four gatekeepers, each bearing their own unearthly wins. 3 Scatters trigger the Free Spins Mode (any more increase the chances for additional spins) but Lilith must get passed a beast in the Hero Bonus™ round first! Players help our demon fight off the villain, earning Free Spins with every successful hit.
Play Free

During Free Spins, rare relic symbols are introduced on the 5th reel, collecting 3 awards x3 multiplier on all wins for the remaining spins. If fewer than 3 are collected, then the relics are generously converted to Wild symbols and will be randomly placed on the reels after the final Free Spin. Meanwhile, 2 VS-symbols trigger the second Hero Bonus™, the Boss Battle! Beat the Boss and each of its symbols convert to a Wild across all reels for the remainder of the Free Spins. Players succeeding in slaying all Bosses are rewarded with all high-pay symbols turning Wild resulting in an Epic Win big enough to wow Dante himself!

With a maximum win of 3968x their bet, your players will be fighting to get to the dark side in Lilith’s Inferno!

Lilith’s Inferno is a 5×4 video slot with Free Spins with Fight Feature. In the fight feature, the player’s avatar is battling one of the ’boss’ characters. Winning the fight makes the defeated character act as WILD for the rest of Free Spins.